Modern transportation infrastructure is characterized by what transportation economists call long-haul economies. This implies that it becomes relatively cheaper to travel an additional km once the trip length increases. Long-haul economies arise because of fast trains, dedicated expressways, and airplanes. Using a simple model, we show that improvements in transportation infrastructure have non-trivial impacts on the location choices of firms. While these investments are often beneficial to large regions, they may be detrimental to small intermediate regions through job losses. Using data on Japan’s Shinkansen, we confirm that ‘in-between’ municipalities that are connected to the Shinkansen witness a sizable decrease in employment.

In a recent VOX article, we discussed the general equilibrium effects of large-scale investments in high-speed rail (HSR) and showed that the local effects can be large and depend on a complex interplay between the relative position of municipalities within the network and the underlying location fundamentals. Also, in another VOX article, Bernard et al. (2014) argue that HSR is crucial for the development of firm supply networks, while Charnoz et al. (2016) show how the decrease in passenger travel time between headquarters and affiliates has allowed management functions to be concentrated in headquarters.

In a recent working paper by Koster et al. (2020), we focus specifically on whether intermediate ‘in between’ areas benefit from investments in HSR. This is important because it is commonplace for local governments and regional interest groups to lobby at the federal/national government and international bodies such as the European Commission or the World Bank for their region to be connected to the new infrastructure.[1] The question, however, is whether these intermediate areas benefit or lose from this connection. It appears that the literature so far shows fairly mixed results.

We argue that an important reason for differences in results is, at least to a certain extent, the presence of long-haul economies (LHE). LHE imply that it becomes cheaper to travel once your trip is longer. To put it more formally, the marginal travel costs decrease with trip length. To see how LHE affect firms’ location decisions, we develop a simple model with four regions where we aim to investigate the effects on employment in intermediate regions. We then compare connected regions (region 3 in the figure below) to unconnected regions (region 2 in the figure below). Our results show that whether region 3 benefits in terms of employment relative to region 2, which remains unconnected, depends on (i) the strength of LHE and (ii) the size of the intermediate region. When there are no LHE and region 3 is large, this region always benefits from the connection. By contrast, when LHE are substantial and region 3 is small, this region may actually lose from being connected to the infrastructure network.

The explanation for these seemingly conflicting findings is that there is a trade-off between a hub effect and a market size effect. In presence of LHE, the hub effect implies that a connection to the new infrastructure makes it easier to reach other places through lower transport costs. This in turn attracts more firms and employment. By contrast, the market size effect implies that if a region is small, it is easier for firms to set up a business in a core region and to transport goods or people to the small connected region instead.

We then bring this model to the data by investigating the effects of HSR on intermediate areas in Japan. The HSR in Japan is commonly referred to as the Shinkansen, which means ‘new trunk line’. The figure below provides a map of Japan’s transportation networks in 2014. There are several reasons why studying the Shinkansen is important. First, one of the main objectives of the Shinkansen was to promote economic growth and development outside Tokyo so also in smaller ‘intermediate’ places (Sato, 2015). Second, we show that the Shinkansen displays strong LHE. Our estimations show that 1% increase in travel distances increases travel time by only 0.8%. LHE in the Shinkansen are found to be stronger than for travel on the Japanese road network or the Dutch rail or road network.

Third, out of 160 million passengers per year, a very large share (i.e., about 65% in 2010) are technical workers and business travelers. Such a high number strongly suggests that the Shinkansen may be considered as a transportation mode that affects significantly firms’ location choices through the travel of non-production workers whose share in Japan has increased from 22% to 41% between 1952 and 2015. Last, the first Shinkansen lines were built more than 50 years ago, so that one may expect their long-run effects to have materialized. All of this makes the Shinkansen a natural candidate to study the impact of LHE on the location of firms. 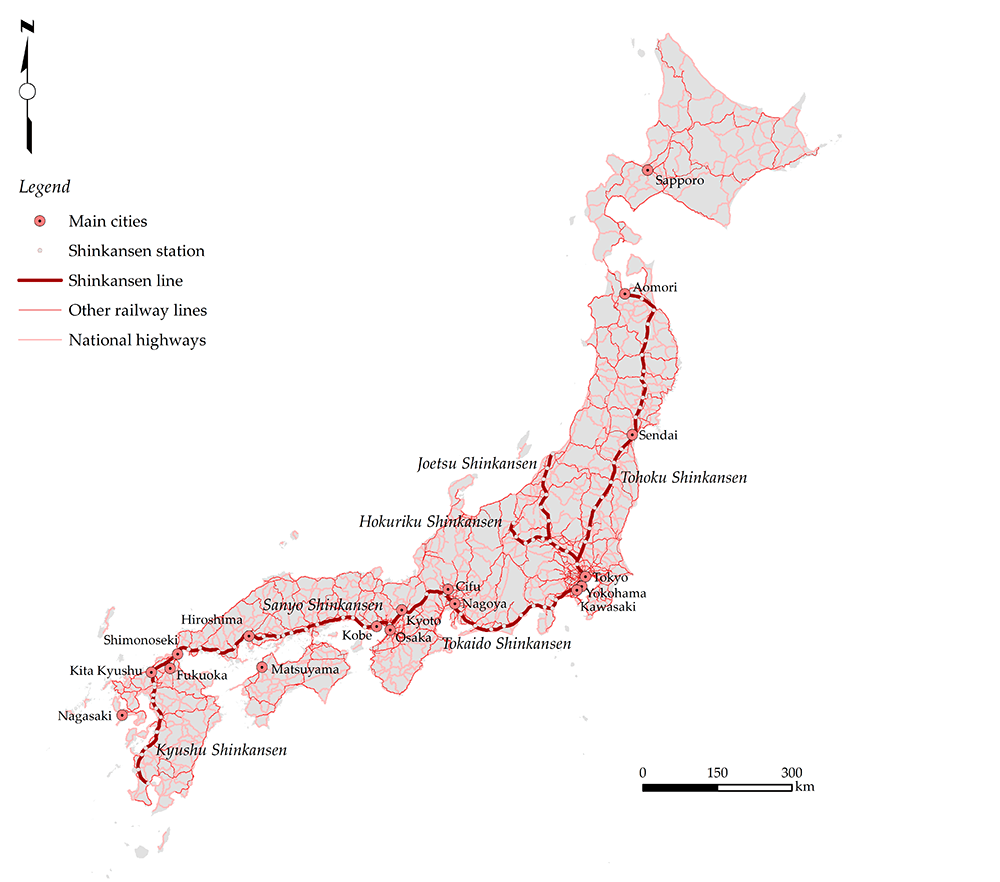 We only keep municipalities that are outside ‘central’ cities as defined by Kanemoto and Tokuoka (2002) and compare the change in employment between 1957 (before the first Shinkansen line was opened) and 2014. Our empirical strategy addresses the issue that the most attractive and dense places may receive infrastructure investments and may be the first places that are connected. Our results deliver a consistent picture: intermediate areas lose employment when they are connected to the Shinkansen. The effects range from about 10 to 40%. While this effect may seem large, it is very much in the same order of magnitude as Faber (2014) and Baum-Snow et al. (2017) who study the impact of new highways in China.

Our findings have an interesting political economy implication as it indicates that lobbying for intermediate places to receive a station may actually hurt the area. More specifically, they explain why the construction of a highway ramp or an HSR station does not necessarily deliver its sought-after payoffs. Even though casual evidence suggests that our results are not exotica, one should keep in mind that the finding that intermediate areas may lose from being connected also depends on the attributes (e.g., the size, the type of employment, etc.) of the region that is connected and the strength of LHE in the transport mode considered. For example, a small and highly productive region which is part of an international trade network may benefit from a connection to a modern transportation infrastructure.